SignStix had the privilege of helping Oathall Community College on its mission to improve and modernise communications with its students and staff.

The college, located in West Sussex, has installed eye-catching digital signage and interactive touch solutions across its foyer, stairwells and classrooms.

SignStix’s partner Toshiba TEC supplied the video walls and digital screens and the content was created and deployed using the SignStix software. This move to digital was part of a multi-million-pound renovation project for the science and mathematics block, with the school choosing to incorporate an interactive touch screen in meeting rooms and digital signage to enhance a modern image for the school and streamline its communications. 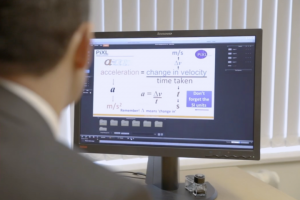 As SignStix is a cloud-based platform, there was no need for the school to download any special software, and the ease of the creator tool offered the school the ability to design its own content without the need to purchase any external creative software.

The usability of the platform allowed the staff of Oathall to regularly update and push out new content on all the screens around the school, keeping students informed of updates in real-time. The school found that with digital signage, the students are far more likely to stop and pay attention than they were previously when using traditional methods of communications such as noticeboards.

The attention-grabbing screens were placed in strategic locations such as the foyer and stairwells which have the highest footfall in order to capture as large an audience as possible.

The screen in the reception area shows welcome messages and displays upcoming events, while the screens throughout the stairwells also provide class and subject-specific information.

This method of communication has proved effective in both creating a welcoming first impression of the school and keeping students up to date and engaged.

“The usage of the SignStix software has been really easy to use, and a very positive experience. Having display screens in the areas where most people circulate has truly transformed the school. The screens are now a key part of our operations and integral to the way we do things. Pupils pay increased attention to notices and we find that the screens are so much more effective than traditional methods at getting messages across”.

Any cookies that may not be particularly necessary for the website to function and is used specifically to collect user personal data via analytics, ads, other embedded contents are termed as non-necessary cookies. It is mandatory to procure user consent prior to running these cookies on your website.