HOW DO I SET UP MY DEVICE FOR A PORTRAIT SCREEN

There are two ways of rotating content into portrait mode:

Some SignStix devices (notably the M12S) and Philips embedded panels have the ability to rotate the output of the entire device. This is known as ‘device-level rotation’. It’s the simplest option because both signage and video are rotated automatically – it’s very much like rotating the content on a mobile phone, for example. However, video resolution is typically limited to 1080 x 1920.

This is where the SignStix Player software dynamically rotates the signage at playback time. Any video content needs to be rotated ‘onto its side’ in advance, so that the physical rotation of the screen then corrects it.

Which type of rotation should I use?

Choose ‘Software Rotation with Pre-Rotated Video’ in these scenarios:

The following sections describe these two approaches in more detail.

Device-level rotation is set in different ways depending on your scenario.  If you’re using an M12S device or similar, it can be set as follows:

If you’re running SignStix embedded on a Philips panel, device-level rotation can be set using the Philips remote control:
– Click the ‘Home’ button on the remote control.
– Navigate to the Rotation setting (on some panels this can be found from ‘Configuration 2’ -> ‘Rotation’).
– Enable ‘Auto Rotate’ and you should see the content swing round into the new orientation.

Once device-level rotation is set-up, the only thing to bear in mind is that you should deploy signs and videos with a suitable aspect ratio. For example, create signs which are 1080 x 1920 (not 1920 x 1080).

If device-level rotation is not available on your device, you will need to use Software Rotation, as described below.

When editing a device in Director there is a ‘Software Rotation’ setting which will cause the Player software to rotate the signage.

– If the ‘bottom edge’ of the screen is mounted on the left (as in the diagram below), set it to 270 degrees. 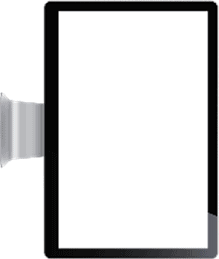 – If the bottom edge of the screen is mounted on the right, set it to 90 degrees.

Now you can deploy signs which are 1080 x 1920 and they will occupy the full space of the portrait screen.

Unfortunately, the Player software is not currently able to rotate video dynamically.  So this needs to be done in advance. The aim is to produce a video which is rendered ‘on its side’.  In this example, a portrait video with an aspect ratio of 9:16 has been rotated onto its side: 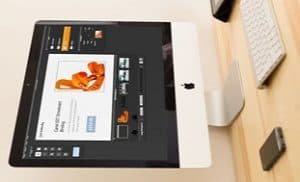 The physical rotation of the screen will then produce the desired effect.

There are two ways to produce the video on its side:

1. If you have control over the source video, you can render it on its side and upload it using ‘Make Compatible’ in the normal way.

2. Alternatively, when uploading your ‘right way up’ video to SignStix, use the ‘Convert to Portrait’ option to rotate it onto its side.

The ‘Convert to Portrait’ option assumes that the ‘bottom edge’ of the screen is mounted on the left (it rotates by 90 degrees anti-clockwise).

If the bottom edge is on the right, please contact SignStix Support and we can enable an extra encode option to rotate in the opposite direction.

It’s highly recommended that all portrait screens are mounted in the same orientation (e.g. bottom edge always on the left).  Otherwise you will need two sets of videos – one rotated to the left, the other rotated to the right.

This website uses cookies to improve your experience while you navigate through the website. Out of these cookies, the cookies that are categorized as necessary are stored on your browser as they are essential for the working of basic functionalities of the website. We also use third-party cookies that help us analyze and understand how you use this website. These cookies will be stored in your browser only with your consent. You also have the option to opt-out of these cookies. But opting out of some of these cookies may have an effect on your browsing experience.
Necessary Always Enabled
Necessary cookies are absolutely essential for the website to function properly. This category only includes cookies that ensures basic functionalities and security features of the website. These cookies do not store any personal information.
Functional
Functional cookies help to perform certain functionalities like sharing the content of the website on social media platforms, collect feedbacks, and other third-party features.
Performance
Performance cookies are used to understand and analyze the key performance indexes of the website which helps in delivering a better user experience for the visitors.
Analytics
Analytical cookies are used to understand how visitors interact with the website. These cookies help provide information on metrics the number of visitors, bounce rate, traffic source, etc.
Advertisement
Advertisement cookies are used to provide visitors with relevant ads and marketing campaigns. These cookies track visitors across websites and collect information to provide customized ads.
Others
Other uncategorized cookies are those that are being analyzed and have not been classified into a category as yet.
SAVE & ACCEPT
Powered by